Well, I know many of you are eagerly awaiting news from my exciting night at the Elders Merriden ANNUAL Golden Sausage Awards yesterday!

I guess the first thing is to put you all out of your misery and explain exactly WHAT the Golden Sausage Awards are, because like you, until yesterday evening I had no clue at all. Maybe a bit crazy to agree to going along to an event I had no idea about, but I’m glad I did, it was lots of fun AND I came home with a TITLE (aside from Mum, Mrs, Author, etc)!

So, the Golden Sausage Awards are a contest and a fundraiser. Due to lots of people with Italian heritage in the Merriden region, they run a contest to find out who can make the best sausage (you know, like the Chorizo types) and be crowned Golden Sausage Winner of the Year. Now I must admit, although I liked fried chorizo in pasta, these types of sausages don’t do much for my taste buds, so I was a little worried when I was asked to be one of the judges of the Top Five that I might gag. But I didn’t. My fave sausage (and it was really hard to pick – once I’d tasted one, I felt like I’d tasted them all… yep, not a sausage fan me) didn’t win unfortunately 😦 But I’m so happy to have been a part of it.

As with all good rural events there was something for everyone. Sausage and beer for the men, jumping castle and Lion’s train for and ME for the women. I had a lovely crowd who listened to me babble of for half an hour about the popularity of rural romance (I dropped a lot of names) and how I came to write it. I talked about my writing journey (the whole long 17 years of it) and a bit about JILTED and MAN DROUGHT. Luckily my new bookmarks, featuring MAN DROUGHT arrived just in time for the event and they garnered lots of excitement.

One question one delightful lady asked was what had been the BEST thing about my writing career thus far. The immediate answer was seeing a cover and holding a book for the first time – that really is an undescribable (is that even a word?) joy. But my thought out answer was the people that I have met through writing – members of Romance Writers of Australian and other writers and readers who I have met online, many of whom have become some of my greatest friends. I might have got a little teary!!

And then, when it was all over I was absolutely GOBSMACKED to be called to the front given a beautiful bouquet of flowers and crowed with a SASH mind you (I’m no Miss Universe and never entertained the possibility of ever winning such a thing) – Miss Golden Sausage 2012. It was all in the name of fun really – there were no other contestants – but it made my night and I will treasure that title aways.

Here’s a few pics from the night: 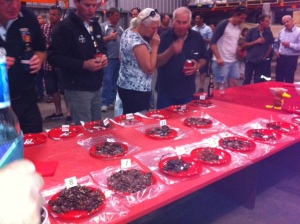 A couple of the keen samplers tasting the sausages before casting their votes! 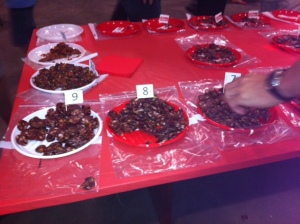 A close-up of some of the “contestants”. 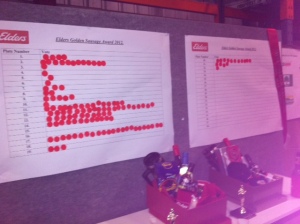 The score board with only a few minutes left to go! 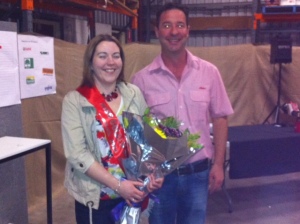 Me with Wayne, the manager at Elders Merriden, just after being crowned Miss Golden Sausage 2012 – you can SEE my glee!!